If you want a fuel efficient small van, these are your best bets.
1. Ford Fiesta Van Econetic 1.6 TDCi – 85.6 mpg – £12,340
First up, we’ve got the new Ford Fiesta-derived van which clocks up an astounding 85.6 mpg. It is made in a wind-powered factory in Dagenham and is the greenest van around. It’s got a cubic metre of space and half a tonne load capacity. It’s specially designed to be aerodynamic as well as having a low roll friction. It is however pricey […]

Need to improve your van? Want to get more out of it? We’ve had a look at just a few van accessories on the market.
5 Roof rack walkways

When loading heavy objects on your van, it is often beneficial to be able to get onto the roof to arrange any cargo. MotoRack produce a roof rack with walkway for this purpose. All roof racks and walkways are coated with anti-corrosive coatings.
4 The polypropylene van lining

Nowadays protecting what is yours is essential to keeping costs down, which at the moment is a key factor in most people’s lives. We have come up with the best safety devices you can use to protect your van from damage and theft.
1. Van Insurance

First on the list has to be van insurance. No matter how safe you keep your vehicle there is always the possibility that someone will get into your vehicle or some unexpected damage can occur. By having an insurance policy this […]

Our Friday Five is back and this week we’ve taken a look at the best Ford vans from past and present. Of course Ford make the Transit, the most popular van in the world, but what about the other vans they’ve produced over the years? With a whole bunch of other Ford vehicles eligible for van insurance quotes, we are looking specifically at the top five Ford vans other than the usual, range topping Transit!
5. Ford Fiesta Van

This week’s Friday Five picks up where last week’s left off as we’re talking all things Classic! Throughout the years the commercial vehicle has evolved and adapted to new ways of doing things, just take a look at our infographic in order to see the progression of the van. So, as we live in a modern, high-tech era, we thought it only necessary to pay homage to some of the commercial vehicles of a time gone by that have helped shape the industry today and […] 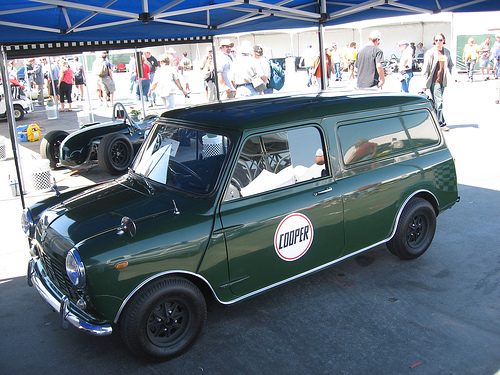 This weeks Friday Five is on our favourite mini vans. Number one in our list is the oldest of the vans but a new one is to be released later on this year and we know it will be just as popular as the original. These small vans are 3 door hatchback passenger cars that have had some changes. They have had the back seats taken out and the rear side windows replaced with […]

Our Friday Five is back this week and it’s all about panel vans! What’s the best and why? Do you currently own a panel van? If so, let us know what by leaving a comment in the box below!
1) Ford Transit

It had to be didn’t it? The king of vans and the most popular of all, the Transit has been revolutionary and the latest model is by far the best yet. The 2012 spec Transit panel van comes with a 2.2 litre TDI diesel engine […]

The average internet user spends about 15 minutes on YouTube everyday. It’s a great catalogue of videos from the past which solidifies various highs and lows on camera for everyone to see. Van fans can use it to see clips of the latest commercial vehicle models and reviews.
So for this Friday Five we scoured through pages of YouTube videos to find some of our favourite van adverts. Hope you enjoy them and let us know if you’ve found an advert that’s even better!
1. Volkswagen – […]

This week’s Friday Five looks at the top five famous van drivers that later shot to fame. Did you know that Elvis used to need commercial vehicle insurance? Neither did we, until now! Have a look at our Friday Five below; we hope you find it as entertaining as we did.

Somehow it just doesn’t have the same effect as a Martini. Before taking on his breakthrough role as James Bond, Connery’s first job was as a milkman in Edinburgh.
“I’ll have a milk, shaken […]

Even in the world of cartoons, characters needed to get from A to B, sometimes with a considerable amount of baggage. So our Friday Five this week lists our favourite cartoon vans, some of which would be pretty awesome if they were real.
1. Mystery Machine

This is now the second time this van has appeared in our Friday Five, but only because it’s such an iconic van. It would be surprising if any child who grew up watching TV never encountered the Mystery Machine. Its quirky […]